by ALBPelasgian
MACEDONIA - ITS ALBANIAN AFFILIATION

The writings of ancient Greek authors prove the Illyrian identity of Ancient Macedonians. Based on this clear information, a large number of historians and linguists of the XIX-th and XX-th century have all agreed to the hypothesis of Illyrian identity of Macedonians. We can mention here: Karl Otfrid Muller, William Smith, Charl Anthony, G. Finlay etc. Later on, other well known linguists that do support the thesis of an Illyrian essence in the Ancient Macedonians language are: G. Kazaroff, M. Rostovtzeff, M. Budimir, H. Baric (Miltiades Hatzopoulos: 1999).

Even the greatest supporters of the hypothesis that the Macedonians were Greeks, do accept a strong influence of the Illyrian language into the Ancient Macedonian language. Paliga (2002) states: "It is therefore difficult to say whether the ancient Macedonians spoke an idiom closer to Thracian, Illyrian, Greek or a specific idiom."

Hammond (1989) accepts that when: “the Macedonians expanded, they overlaid and lived with peoples who spoke Illyrian, Paeonian, Thracian and Phrygian, and they certainly borrowed words from them which excited the authors of lexica and glossaries”.

To be fair, the debate on the characteristics of the Macedonian language is still unfinished, because there are: 'theories varying from a basically Illyrian “creole” to a Greek-thracian-illyrian ‘pidgin’. (A history of ancient Greek: from the beginnings to late antiquity: 437)

“The period of Illyrian control in the plain of Macedonia lasted from c. 800 to c. 650 B.C. The evidence has survived almost entirely in warrior-graves and women's graves which were much less numerous. There were cremations sometimes in urns, as well as inhumations, large pithoi were used as coffins, e.g. at Vergina; and burials were grouped together, sometimes under a tumulus and sometimes not. New articles were bronze pendants of various kinds, bronze belt-plates, large bronze spectacle-fibulae, armlets of thin bronze wire and armlets of heavy bronze metal with incised decoration, and many bronze beads of various shapes. At Vergina, where the same cemetery was used for Illyrian chieftains, two new forms of bowl were evidently copied from wooden prototypes, such as are made by the Vlachs in modern times. New tumuli constructed for Illyrian chieftains contained many spearheads and spear-butts, sickle-shaped knives and heavy bracelets. The homeland of these new elements was in central Yugoslavia, and the typical site there was Glasinac, where the tumuli were numbered in thousands.
In the cemetery at Vergina the period of greatest prosperity, c. 900-800 B.C., was followed by radical changes and a growing impoverishment. In some tumuli the partly cremated remains were placed in urns, and sickle shaped knives with whetstones and spears over two metres in length with iron head and iron butt accompanied some of the warriors. In Upper Macedonia the presence of lllyrian rulers was shown by burials with similar weapons and ornaments at Visoi and Petilep in Pelagoma; at Pateli in Eordaea, and at Vucedol near Skopje and by Titov Veles. Objects typical of them have been found in small numbers at Kozani and at sites in the middle Haliacmon valley. To the east of the Vardar they seem to have driven the Paeonians back towards the Strymon valley, and there are concentrations of Illyrian objects at Kumanovo and at Radanja near Stip. Large numbers of tumuli are reported in this area; some at least were made probably for Illyrian warriors. Other groups of Illyrians established themselves in the middle Strymon valley, where their name in Classical times was the Maedi; in the Kumli valley between Doiran and Serres; and in the vicinity of Amphipolis. There were penetrations also into northwest Bulgaria and even beyond the Danube in Rumania.

The expansion of the Illyrian tribes had some effects also on northern and central Greece. At Vitsa in Zagori burials were made in shallow trenches, or in cist-graves roofed with branches on which stones were placed, or under a cairn of stones. The burials were close-packed; set in three layers, and very close to the settlement, and the cemetery was in use from just before 900 B.C. into the fifth century B.C. To judge from the objects buried with the dead this community had contacts with Barc, vergina, Vodhine, the Illyrians, and also southern Greece”.
(Migrations and Invasions in Greece and Adjacent Areas: 1976) 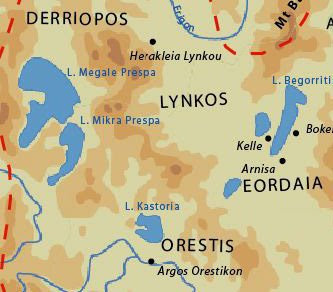 Also, the ancient traditions show that prior to the Macedonian hegemony, the territories north of mount Olymp were called “Illyria”. This is what Herodotus (8.137) confirms:


137. Now of this Alexander the seventh ancestor was that Perdiccas who first became despot of the Macedonians, and that in the manner which here follows:--From Argos there fled to the Illyrians three brothers of the descendents of Temenos, Gauanes, Aëropos, and Perdiccas; and passing over from the Illyrians into the upper parts of Macedonia they came to the city of Lebaia.

The latest archaeological findings do support this statement. Here, we can mention the table with inscriptions found a decade ago near the Greek-Macedonian border. This 2800 years old, white marble chronicle, chiselled in late Phoenician characters, unveils in archaic Greek language some important details concerning 8th c. BC Macedonian invasion in the Balkans.

Prof.Doc. Ahmet Leitani at Beirut University in Lebanon has worked on the transcript, transliteration and translation of this inscription. According to his work, the inscription reads:

Perdikas son of Argeos leading his Makestes when approached to Vedissa (Edessa) citadel, headed down from upper Illyria, offered sacrifice to uppermost (god) Savazos. Afterwards when conquered entire Midas country, being outraged with foreign Greeks who were charged for intrigues, extincted them immediatelly while released indigenous Briges to wander away, because both these people spoke different languages. Since then being elder sovereign of Brigea enjoyed the profits of very ancient city renaming it to Aigai while kept reppeling fugitives to return with excemption of captives. This marble chronicle was chiseled in Greek language by Dredas son of Gordios, in memory of a sorrowful remembrance.

Also, Strabon (7.5.1) states that: “What is now called Macedonia was in earlier times called Emathia. And it took its present name from Macedon, one of its early chieftains. And there was also a city Emathia close to the sea. Now a part of this country was taken and held by certain of the Epeirotes and the Illyrians, but most by the Bottiaei and the Thracians.

The most reasonable and logical explanation regarding the etymology of the name of the Ancient Macedonia is found in the language of Illyrians and Epirotes, who were the ethnic inhabitants of Ancient Macedonia. The very name of Macedonia, formerly known as 'Emathia,' derives in all probability from the Albanian word “E Madhia”, meaning “The Greatest”.

The ties of kinship among the kindred peoples of Illyria, Molossia, and Macedonia were still more strengthened by the intermarriages between their dynasties, Olympias, the mother of Alexander the Great, was a daughter of Molossia. Through the right of succession derived from the intermarriages, the same king sometimes happened to rule two or all three kingdoms.

The ancient myths as well, tell us that the Macedonians have had a close relationship with the Illyrians. In the Ethnika of Stephanus of Byzantium Atintan is the son of the Macedon (Μακεδών). At the same time, the ancient chronicles mention Atintians as an Illyrian tribe, located between Illyria, Epirus and Macedonia. Even during the Medieval times, the Byzantine writers refer to Albanians as Macedonians. Macedonian at that time marked someone who spoke Albanian. Until about the fifteenth century Albanians were not called Albanians but Illyrians, or even Macedonians. This means that the terms Macedonian, Illyrian and Albanian were interchangeable and were used to note the Medieval Albanian.

At that time, even the educated Albanians were signing and declaring themselves as Macedonians. For instance, P. Bodganus (1685) described himself as 'Macedo' and the Italo-Albanian Nicola Chetta (1742-1802) described his people as 'Macedoni' (7.24).This is the reason why the propagandistic battles between the Slavs and the Greeks for the Macedonian identity are simply failed efforts to steal Macedonia territorially and historically. 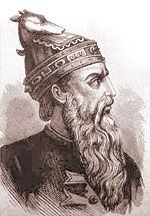 In a letter sent to the Prince of Taranto, George Kastriota Scanderbeg, the Albanian National Hero, reaffirms himself as a descendant of Alexander the Great and of Pirro of Epirus:

“I do not have to speak for the Epiroti. They are very much stronger men than your Tarantini, a species of wet men who are born only to fish. If you want to say that Albania is part of Macedonia I would concede that a lot more of our ancestors were nobles who went as far as India under Alexander the Great and defeated all those peoples with incredible difficulty. From those men come these who you called sheep. But the nature of things is not changed. Why do your men run away in the faces of sheep?"

As shown above, the ancient written material, the archaeological findings, as well as mythological, ethnographical and linguistic material, they all testify to the fact that Macedonia was and is Albanian during 4000 years of her history.

Last but not least, let's cite the words of Edith Durham:

'The Albanians are among the very oldest inhabitants of the Balkan peninsula.
Classical authors give the names of very many tribes which dwelt in those lands when history
dawns. The Greeks classed them as 'barbarians' and they spoke a non-Greek tongue.
They were united in groups under native kings, and of these groups some of the most important
were the Macedonians, the Illyrians, and the Epirotes. According to Strabo, all three spoke
the same language. And it is from the Illyrians and the Epirotes that the Albanians of to-day
descend. Modern Albanian, in all probability, derives from the language of Alexander the Great
and King Pyrrhus'.

Re: MACEDONIA - ITS ALBANIAN AFFILIATION

by Zeus10
This is the topic regarding Ancient Macedonia, and doesn't intend focusing on etymology, but since the word tumulus is brought forward as an evidence to prove Macedonian an Illyrian affinity I have to stop a bit in its possible meaning. MOst of the linguists think that its possible etymology comes from :

tumulus [ˈtjuːmjʊləs]
n pl -li [-liː]
(Social Science / Archaeology) Archaeol (no longer in technical usage) another word for barrow2
[from Latin: a hillock, from tumēre to swell up]

but I think this explanation is poor and deviant. The real meaning for it is the Albanian word tu mulu(dialekt), te mbuluar(te mbuloj)= to cover= buried Tumulus is just a grave covered by great amount of dirt: Even today in Albanian language people use te mbuloj me dhe to express the word bury.
Even in """Greek"" the word carries Albanian verb: tumbus= te mbush me dhe= to fill with earth= make a bank of earth: In certain words in Albanian the letter m has the phonetic value of mb. This is valid for the Ancient Greek too.

Re: MACEDONIA - ITS ALBANIAN AFFILIATION

Zeus10 wrote:This is the topic regarding Ancient Macedonia, and doesn't intend focusing on etymology, but since the word tumulus is brought forward as an evidence to prove Macedonian an Illyrian affinity I have to stop a bit in its possible meaning. MOst of the linguists think that its possible etymology comes from :

The real meaning for it is the Albanian word tu mulu(dialekt), te mbuluar(te mbuloj)= to cover= buried

Even today in Albanian language people use te mbuloj me dhe to express the word bury.
Even in """Greek"" the word carries Albanian verb: tumbus= te mbush me dhe= to fill with earth= make a bank of earth:
In certain words in Albanian the letter m has the phonetic value of mb. This is valid for the Ancient Greek too.

That's excellent Zeus10!
Would you mind if we put in article your points of view regarding etimology of Tumulus?
Your etymological elaboration need to be summarized and then we may incorporate it somewhere in the article.
All times are UTC
Page 1 of 1
Powered by phpBB® Forum Software © phpBB Limited
https://www.phpbb.com/