The rival to the Bible

The rival to the Bible

by Zeus10
By Roger Bolton
What is probably the oldest known Bible is being digitised, reuniting its scattered parts for the first time since its discovery 160 years ago. It is markedly different from its modern equivalent. What's left out?

The world's oldest surviving Bible is in bits.
For 1,500 years, the Codex Sinaiticus lay undisturbed in a Sinai monastery, until it was found - or stolen, as the monks say - in 1844 and split between Egypt, Russia, Germany and Britain.
Now these different parts are to be united online and, from next July, anyone, anywhere in the world with internet access will be able to view the complete text and read a translation.
For those who believe the Bible is the inerrant, unaltered word of God, there will be some very uncomfortable questions to answer. It shows there have been thousands of alterations to today's bible. 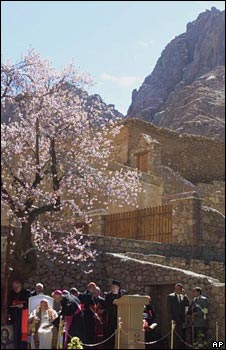 The Codex, probably the oldest Bible we have, also has books which are missing from the Authorised Version that most Christians are familiar with today - and it does not have crucial verses relating to the Resurrection.
Anti-Semitic writings
The fact this book has survived at all is a miracle. Before its discovery in the early 19th Century by the Indiana Jones of his day, it remained hidden in St Catherine's Monastery since at least the 4th Century.
The monastery at the base of Mt Sinai
It survived because the desert air is ideal for preservation and because the monastery, on a Christian island in a Muslim sea, remained untouched, its walls unconquered.
Today, 30 mainly Greek Orthodox monks, dedicated to prayer, worship there, helped as in ages past by the Muslim Bedouin. For this place is holy to three great religions: Judaism, Christianity and Islam; a land where you can still see the Burning Bush where God spoke to Moses.
The monastery itself has the greatest library of early manuscripts outside the Vatican - some 33,000, and a collection of icons second to none.
Not surprisingly, it is now a World Heritage Site and has been called a veritable Ark, bringing spiritual treasures safely through the turbulent centuries. In many people's eyes the greatest treasure is the Codex, written around the time of the first Christian Emperor Constantine.
When the different parts are digitally united next year in a £1m project, anyone will be able to compare and contrast the Codex and the modern Bible.
Firstly, the Codex contains two extra books in the New Testament.
One is the little-known Shepherd of Hermas, written in Rome in the 2nd Century - the other, the Epistle of Barnabas. This goes out of its way to claim that it was the Jews, not the Romans, who killed Jesus, and is full of anti-Semitic kindling ready to be lit. "His blood be upon us," Barnabas has the Jews cry.
Discrepancies
Had this remained in subsequent versions, "the suffering of Jews in the subsequent centuries would, if possible, have been even worse", says the distinguished New Testament scholar Professor Bart Ehrman. 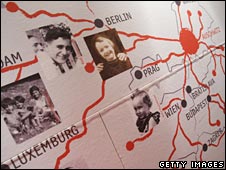 The suffering of Jews in the subsequent centuries would, if possible, have been even worse had the Epistle of Barnabas remained
Professor Bart Ehrman
And although many of the other alterations and differences are minor, these may take some explaining for those who believe every word comes from God.
Faced with differing texts, which is the truly authentic one?
Mr Ehrman was a born again Bible-believing Evangelical until he read the original Greek texts and noticed some discrepancies.
The Bible we now use can't be the inerrant word of God, he says, since what we have are the sometimes mistaken words copied by fallible scribes.
"When people ask me if the Bible is the word of God I answer 'which Bible?'"
The Codex - and other early manuscripts - omit some mentions of ascension of Jesus into heaven, and key references to the Resurrection, which the Archbishop of Canterbury has said is essential for Christian belief.
Other differences concern how Jesus behaved. In one passage of the Codex, Jesus is said to be "angry" as he healed a leper, whereas the modern text records him as healing with "compassion".
Also missing is the story of the woman taken in adultery and about to be stoned - until Jesus rebuked the Pharisees (a Jewish sect), inviting anyone without sin to cast the first stone.
Nor are there words of forgiveness from the cross. Jesus does not say "Father forgive them for they know not what they do".
Fundamentalists, who believe every word in the Bible is true, may find these differences unsettling.
But the picture is complicated. Some argue that another early Bible, the Codex Vaticanus, is in fact older. And there are other earlier texts of almost all the books in the bible, though none pulled together into a single volume.
Many Christians have long accepted that, while the Bible is the authoritative word of God, it is not inerrant. Human hands always make mistakes.
"It should be regarded as a living text, something constantly changing as generation and generation tries to understand the mind of God," says David Parker, a Christian working on digitising the Codex.
Others may take it as more evidence that the Bible is the word of man, not God.

Re: The rival to the Bible

by Patush
"the suffering of Jews in the subsequent centuries would, if possible, have been even worse"

Utter bs, Madoff stole 65 billion from Christian Americans and not a single Jew was harmed, so where is this suffering that they talk about?
If it were true why did they always live and still do among Muslim and Christian nations? Jews were expelled from 109 countries and no one asks why?
All times are UTC
Page 1 of 1
Powered by phpBB® Forum Software © phpBB Limited
https://www.phpbb.com/