arberies.jpg
You do not have the required permissions to view the files attached to this post.
The only thing necessary for the triumph of evil is for good men to do nothing
Top

Mozaiku i Orfeut-Gllamnik-Podujeve.jpg
You do not have the required permissions to view the files attached to this post.
Top


Let`s make an short timeline:
The first time that Arber is mentioned, is in an inscription, III century BC, in Finiq in South Albania:

It is writen arbaios for arber.

In the second century AD, Ptolemy the ancient geographer and astronomer from Alexandria shows the city of Albanopolis in the northeast of Durrës.

At the same period it is a grave found in Gorno Sonje near Shkup, today capital of FYROM, where someone named Mikat from Albanopolis is mentioned: 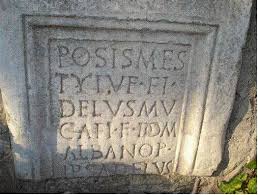 Now i want ot repeat one of my previous posts because a couple of members have expressed difficulty to understand this post.
Nicholas Hammond in his book:
Migrations and Invasions in Greece and Adjacent Areas
Chapter:
Albanian Ethnogenesis says:

The gap between Ptolemy and Acropolites is bridged by the mention of "Ducagini d'Arbania" in a seventh-century document at Ragusa (Dubrovnik). These Ducagini instigated a revolt against Byzantine rule in Bosnia and in particular at Ragusa, but they had to submit after the second unsuccessful intervention at Ragusa, to which they were said to have come "de terra ferma," i.e overland (15). The name 'Ducagini' is evidently derived from the Latin 'dux' and the common Albanian name 'Ghin'; indeed an Albanian chieftain in 1281 was referred to as "dux Ginius Tanuschus"(16). Moreover, the leading family of northern Albania from the thirteenth century to the Turkish invasion in the fifteenth century was called 'Dukagjin' (Lek Dukagjini the codifier was one of them), and their properties lay between Lesh (Lissus) and the bend of the Drin. It is here then that we should put the ‘Arbania' of the seventh century. The conclusion that 'Albanians' lived there continuously from the second century to the thirteenth century becomes, I think, unavoidable (17).

Hammond refers to an old document of the seventh century AD from the archives of Ragusa(Dubrovnik). The document is published by V. Makusev, Pamiatniki Dubrovnika (Petrograd, 1867), pp. 307 and 373.
This document is what is usually called primary source. What is an primary source, because you probably don`t have any idea: Primary source
In the study of history as an academic discipline, a primary source (also called original source or evidence) is an artifact, a document, diary, manuscript, autobiography, a recording, or other source of information that was created at the time under study. It serves as an original source of information about the topic.

This document confirms us what we have read in other documents quoted by me in this post, the existence of this country mentioned by different ancient authors as Albanopolis or Arvanon. Also, the most interesting fact is that we find here mentioned this leader of the uprising named Ducagini d`Arbania. This Dukagjini(Alb), are probably the most famous family in the history of Albania. This Ducagini arrived in Ragusa from terra ferma, i.e Arbania. And we have still today in the Tirana County, northeast of Durres this village named Arbana

But it`s interesting also the name of this Albanian lord. Hammond explain very well it:
The name 'Ducagini' is evidently derived from the Latin 'dux' and the common Albanian name 'Ghin'; indeed an Albanian chieftain in 1281 was referred to as "dux Ginius Tanuschus" Dux
That an title became part of the surname need some time. Probably, to one of the ancestors of this Dukagjini, was given this title of Dux and his name was Gjin. Probably after generations that this title was use by this family, this title became part of their surname and we have this noble Albanian family of middle age, The Dukagjini Family. The most famous from the members of this family was Lek Dukagjini, the codifier of the Kanun, the most famous of different Albanian Kanuns, the ancient Constitution of the Albanians.
I remember that i asked servs that meanwhile the Albanians were an consolidate ethnic group, with their nobilty and abble to put in difficulty the East Roman Empire with their uprisings, where were the ancestors of the today serbs? Nobody from the servs answer to my question. Well is high probabile that in this period of time, the ancestors of the serbs were among Pashtun tribes in today Afganistan, this is one of the different theories. Other theories speak for different locations of the serbs, Caucasus, beyond the Ural mountain in Siberia, even Indonesia, etc, etc, etc.

Another important document about Albanians is this:

It can be seen that there are various languages on earth. Of them, there are five Orthodox languages: Bulgarian, Greek, Syrian, Iberian (Georgian) and Russian. Three of these have Orthodox alphabets: Greek, Bulgarian and Iberian. There are twelve languages of half-believers: Alamanians, Franks, Magyars (Hungarians), Indians, Jacobites, Armenians, Saxons, Lechs (Poles), Arbanasi (Albanians), Croatians, Hizi, Germans.

I see mentioned in the document Albanians and Croats among the other nation of the world, but not servs. Of course there were some servs:
Practically nothing was known about the Serbs before 1136 when Tihomir, who was merely a shepherd, became Grand Zupan.
In the 12th century, according to a contemporary chronicler, W. of Tyre, the Serbs were "an uncultured and undisciplined people inhabiting the mountains and the forests" and who "sometimes ...
quit their mountains and forests... to ravage the surrounding countries", (cited by W. Miller, Essays on the Latin Orient, 1921, p. 446).
Top